There are almost 400,000 people in Finland with a payment default. Invest in PCKT and join us on our mission in educating the next generation – today’s children and youth – to be more responsible spenders and economists of their own lives.

On a mission to preserve the welfare state

100+  years old Finland is one of the finest success stories in the world. The small northern nation has been able to build itself into a widely admired welfare state. The foundations of the welfare state, however, have started to creak.

We’ve lost some of our global competitiveness. Large age groups are retiring, and our purchasing power has weakened when costs of living have increased.

To overcome the weakened economic situation, we have taken, and are still taking, debt. We owe as state, cities, municipalities, families and citizens. We spend more than we earn. This is a heavy economic and social problem.

Jaakko Rytsölä is known as  a man who bought a Lamborghini and lost it. Now, 17 years later, there are almost 400,000 people in Finland with a payment default. This spiral can be cut off by educating the next generation of more responsible spenders.

The welfare state of ours is a unique entity we want to maintain for future generations. However, the current development is making this difficult. We have genuine concerns about the future of our children. We’ve decided to change the course, to work for the preservation and development of the welfare state. We see a new, better-off nation, whose economic skills already acquired as a child allow the welfare state to survive.

We invite all parents to a joint mission. The recipe is simple; together we’ll raise our children to become the financial experts of the future – thoughtfully consuming, goal-oriented new-age citizens.

PCKT helps children to become economists of their own life

PCKT, or “pocket” is a weekly allowance and payment card for children and youth with mobile applications for both the parent and the child. It makes receiving, paying, saving and investing money, monitoring of spending and learning financial skills easier than ever before.

The use of cash is decreasing. In Sweden, researchers have estimated that no cash should be received after March 2023 (Source: Talouselämä 8.10.2017). As physical money disappears, understanding the value of money and teaching your own finances requires new methods.

With the help of PCKT, the child learns the value of the money faster, and that all the money does not have to be spent immediately. Part of the money can be put aside for savings or investments. With PCKT, the child learns together with his parents about intelligent use of money, delayed gratification and self-control. Through these skills, we raise the new generation of citizens, economists of their own lives.

PCKT is bank-independent, thus suitable for customers of all banks. The parent adds his/her payment card credentials to the mobile application and order the card for the child. In case of multiple children, all cards are controlled by the same parent’s application. The child’s card will be delivered home by post. The parent can transfer money to the child’s card via the mobile application, automatically every week or ad hoc when needed. The parent sets the usage limit for the card and will be notified about the purchases made by the child.

According to our research (TNS Gallup 2015, n = 1004), most families use chores around the house, or doing homework, for weekly allowances. With PCKT, parents are able to set tasks for their children and when the task is done, the agreed amount of money is transferred to the child’s card.

PCKT is based on three “pockets”: the Spending Pocket, the Savings Pocket, and the Investment Pocket. With these pockets, it’s easy to discuss the different ways how money can be used, and to increase the child’s understanding and perseverance.

The money in this pocket, used by the child with his own payment card, is for everyday expenses. The application tells you how much money has come and gone, how much is left and where it has been spent. The parent can receive, if wanted, real-time notifications of all purchase transactions.

The money in the Savings Pocket is for child’s own goals. The child can create his own savings targets and follow up on saving them. Regularity is the key here.

This pocket is for the future, but it’s useful to get familiar with the subject of investing already at a young age. Money in the investment pocket is directed to a bank account chosen by the parents. Repetition helps the child to learn the concept of investing.

PCKT Money Plc has its own Mastercard card license, which is required when issuing Mastercard cards. With the license, the company has the opportunity to make various card programs. The company processes the Mastercard transactions itself in real time. Proprietary payment processing ensures a low cost structure and independence from third-party systems. It also enables fast product development in payments industry in the future. PCKT Money Plc’s technical environment is PCI DSS* level 3, which is a prerequisite for safe handling of card data and for joining the international payment system. 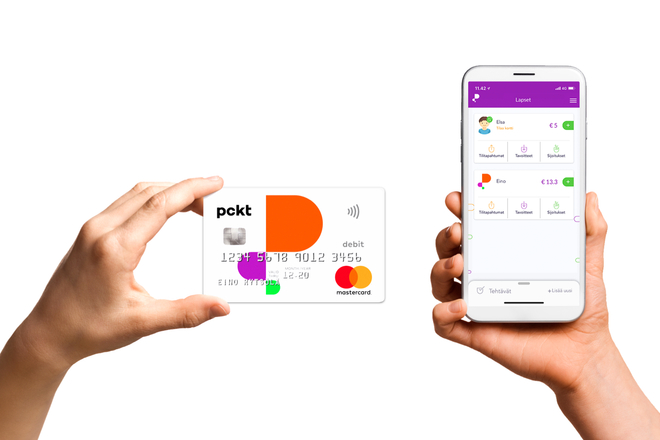